During the late 1970’s school break-time meant play-time and the options available to the average bored school kid were fairly limited. ‘Army’ was always an option, but running around pretending to shoot your mates with a tommy gun, while making a daft laughing sound (‘hahahahahahahaha!’), wore a bit thin after a while. There was perennial favourite British Bulldog, the rules of which I still don’t fully grasp even now, forty years later. Hide and seek? That helped kill some time, I guess (although if you were feeling a little more adventurous, and had a tree handy, you could always give Acky 123 a go). On the whole though break-time could be pretty tedious. Thank God for Top Trumps! The stats card game swept the UK during the late Seventies and relieved us from break time tedium. Well, for a while anyway.
END_OF_DOCUMENT_TOKEN_TO_BE_REPLACED

The Top Trumps craze swept UK playgrounds in the late Seventies and early Eighties as kids battled each other in games of statistic-based one-upmanship. Top Trumps featured a dazzling array of subjects, all squarely aimed at boys – tanks, cars, bikes, trains, warplanes, boats, etc – and packs from that era are much sought after by collectors. Arguably though, the most highly prized Top Trumps are the two packs of Horror cards released in the late 1970’s.
END_OF_DOCUMENT_TOKEN_TO_BE_REPLACED 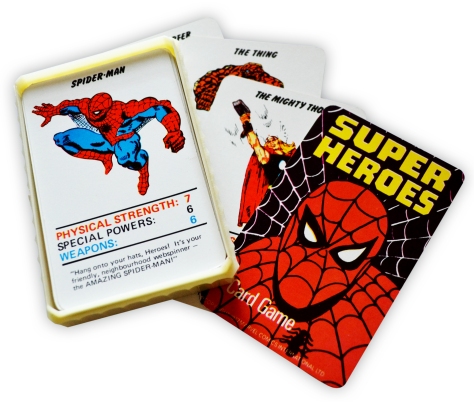