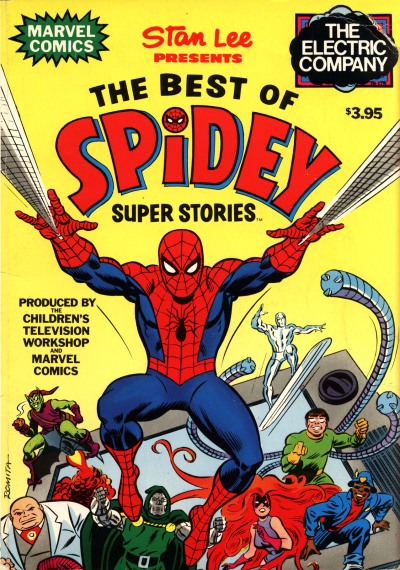 The Best of Spidey Super Stories

In the mid-Seventies Fireside Books published collections of reprinted comic book stories – beginning with Origins of Marvel Comics by Stan Lee – that are now widely considered to be the first trade paperbacks. The books featured a selection of stories featuring Marvel Comics characters with introductions and commentaries by original story author Stan Lee. These books proved such a success that several more volumes of reprints followed including Stan Lee Presents The Best of Spidey Super Stories published in 1978.

In my last article on the Marvel/Fireside books, The Incredible Hulk, I mentioned that Stan Lee’s text commentaries for that volume seemed to be skewed at a slightly younger audience. If that’s true then it goes double for his introduction to this volume which reprints tales from Spidey Super Stories, a series aimed at younger readers. Running for 57 issues between October 1974 and March 1982 the series was specifically created as a reading aid and was published in conjunction with The Children’s Television Workshop. The comic also tied in with The Electric Company, a TV programme produced by CTW, famous for the long running children’s show Sesame Street.

Created as a companion show for children who were growing a little too old for Sesame Street, and utilising sketch comedy to entertain and educate, The Electric Company was broadcast between 1971 and 1977. In 1974 the show began running short sketches featuring a live action Spider-Man, who engaged with characters from the show and communicated with word balloons suspended above his head, which further strengthened the link between the show and the comic which began publication soon after.

The stories are all around 12 pages in length and are broken down into two or three short chapters. Each page has less panels than a regular comic and the word balloons feature fewer words which are printed at a larger size for easy reading, and according to the introduction the comic was produced following guidelines from the Ontario Institute for Studies in Education. All the stories feature at least one other Marvel character than Spider-Man: some are villains (Dr Doom, Dr Octopus, The Kingpin) while others are super-heroes (Ms. Marvel, Medusa, The Silver Surfer, The Hulk, etc). The book also reprints two of the original covers as well as single bonus pages such as “Who is Ms. Marvel?” and cut-away drawings of Peter Parker’s apartment.

The stories featured in this volume were written by Jean Thomas, wife of Marvel Editor-in Chief Roy Thomas, and Editor Jim Salicrup who worked on The Avengers and The Uncanny X-Men amongst others. The art is bolder and simpler than a regular comic book with fewer shadows and lighter brush work and is provided by Win Mortimer, the Golden Age artist who made his name working for DC in the Forties and Fifties, and Mike Esposito, who is now best remembered as Ross Andru’s art partner.

Sadly Spidey Super Stories is all but forgotten today which is a shame as the comics are not without their charm. Mindful of their young audience, they convey simple moral messages to the reader – crime doesn’t pay, pollution is bad, be nice to people – and the stories are light-hearted with the emphasis less on danger than on good-hearted adventure. To my knowledge The Best of Spidey Super Stories is the only time these comics have been reprinted and second-hand copies are hard to find and expensive.

Some of the original short sketches from The Electric Company are available on YouTube and, although a little corny by todays standards, they are notable for being the first time a live action Spider-Man appeared regularly on television and for introducing the character to a younger audience.

Next: Captain America, Sentinel of Liberty by Stan Lee from 1979