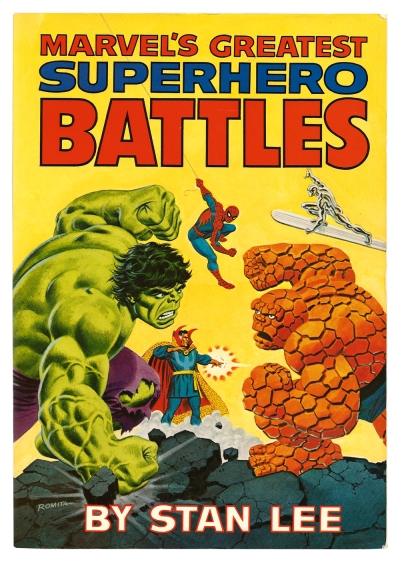 In the mid-Seventies Fireside Books, an imprint of Simon & Schuster, published four collections of reprinted Marvel comic book stories now widely considered to be the first trade paperbacks. The books proved such a success that several more reprint collections followed, including Marvel’s Greatest Superhero Battles by Stan Lee published in 1978.

The book continues the format established by the previous collections and features stories that share a common theme. With the original books – Origins of Marvel Comics, Son of Origins of Marvel Comics, Bring On The Bad Guys and The Superhero Women – the characters origin stories tied the collections together. Marvel’s Greatest Superhero Battles instead features classic confrontations between Marvel’s heroes and villains, with the stories author Stan Lee bookending the collection with an preface and epilogue. Each story also features a text commentary by Lee in which he thanks the artists and explains the genesis of each story. The book sports a terrific painted cover by John Romita, with The Hulk looking particularly menacing, and features full page reproductions of several covers from the original stories.

The Fantastic Four and The Avengers vs The Hulk
“The Hulk vs The Thing”, reprinted from The Fantastic Four issue # 25 (April 1964) and “The Avengers Take Over!”, reprinted from The Fantastic Four issue #26 (May 1964)
The collection kicks off strongly with a two issue slug-fest between two of Marvel’s most powerful heroes, The Hulk and The Thing. In the first story The Hulk travels to New York to fight The Avengers who, unbeknownst to him, are absent trying to hunt him down. Instead he trades punches with The Thing, then with The Fantastic Four and finally the returning Avengers join in the fray. Although The Hulk and The Fantastic Four had fought before (The Fantastic Four #12, March 1963) this battle is a lot longer and more drawn out and, as is typical of nearly all superhero fights, the battle ends with a draw as The Hulk transforms back into Bruce Banner (who Lee mistaking calls Bob) and escapes. It’s an action-packed tale as the two protagonists level several conveniently empty buildings and damage the George Washington Bridge. True, The Hulk is depicted as a bit of an obnoxious thug but the story is still great fun. Art is provided by Jack Kirby with George Bell (the pen name for artist George Roussos) inking. Roussos had only just started working with Kirby and to my eye they are not a good match – Roussos doesn’t do justice to Kirby’s grandiose pencils with The Thing suffering the most.

Daredevil vs The Sub-Mariner
“In Mortal Combat With… Sub-Mariner!”, reprinted from Daredevil issue #7 (April 1965)
This tale begins with Prince Namor, The Sub-Mariner, travelling to the surface world in an attempt to negotiate the return of lands that he believes rightly belong to him and his people. He hires attorney Matt Murdock (the alter ego of Daredevil) and attempts to plead his case through the law courts. Unsurprisingly things go awry and the story quickly degenerates into a fight between the two characters. Again, the result is a draw with Namor acknowledging the courage of the blind hero before returning home. Veteran artist Wally Wood pencils the issue and a very good job he does too – his finely detailed work feels reminiscent of his EC Comics science fiction comics from the Fifties. This story is also notable for featuring the first appearance of Daredevil’s distinctive red uniform.

The X-Men vs The Blob
“Beware of The Blob!”, reprinted from The X-Men issue #3 (January 1964)
This early reprint from The X-Men is pretty standard fair: the team approaches a mutant working as a circus performer and offers him a place in Xavier’s School for Gifted Youngsters. Foolishly they reveal their secret identities and the location of their school before discovering his evil intent and The Blob attacks the school with a gang of his circus cohorts instead. A long fight ensues before Professor X wipes the memories of the attackers and sends them on their way. It’s an OK story notable only for introducing the mainstay X-Men villain. Jack Kirby provides the artwork.

The Silver Surfer vs Thor
“The Good, The Bad, and The Uncanny!”, reprinted from The Silver Surfer issue #4 (February 1968)
This 39 page story features two battles: The Silver Surfer first trades blows with the evil Norse God Loki, before being tricked by Loki into fighting Thor. It’s a satisfyingly action-packed story with artist John Buscema on fine form while Lee provides the grandiose, mock-Shakesperian dialogue. However there is one bone of contention with the story’s inclusion in this book: in his introduction to the chapter Lee gives the distinct impression that he alone came up with the idea for The Silver Surfer whereas in truth the character was solely created by Jack Kirby. When John Buscema was hired to pencil the character’s first ongoing series in the late ’60s Kirby was none too happy, and the snub planted the early seeds of dissent that would eventually lead to the artist quitting Marvel for rival DC in 1970. However, by the mid-Seventies both he and Lee has patched up their differences enough to work on another Fireside Book from 1978, The Silver Surfer: The Ultimate Cosmic Experience, considered by many to be the first graphic novel.

Iron Man vs The Sub-Mariner
“Disaster”, reprinted from Tales of Suspense issue #79 (July 1966), “When Fall The Mighty!”, Tales of Suspense #80 (August 1966) and “The Power of Iron Man!”, Tales to Astonish #82 (August 1966)
The ever belligerent Sub-Mariner makes his second appearance in this collection in a three part story that, although satisfying at it’s conclusion, has a rather daft beginning. A beleaguered and weakened Iron Man is attacked by Sub-Mariner nemesis Krang and the hero barely manages to rebuff the assault, causing the Atlantean to flee. The exchange is witnessed by Prince Namor who, enraged that Iron Man has dared to fight his enemy, attacks the golden Avenger in a bizarre attempt at revenge. It’s a pretty silly premise but the story quickly kicks into gear once it settles down to the battle – I’ve mentioned before my antipathy towards Namor so I find it quite satisfying watching Iron Man clean his clock. The first two instalments of the story were drawn by Gene Colan with his usual brio but he came down with the flu while drawing the story’s conclusion so Jack Kirby finished off the art chores; the jump between the two artists is a bit sudden but Kirby does a bang-up job wrapping up the story.

Dr Strange vs The Dread Dormammu
“Beware…! Dormammu is Watching!”, reprinted from Strange Tales issue #139 (December 1965), “The Pincers of Power!”, Strange Tales #140 (January 1966) and “Let There be Victory!”, Strange Tales #141 (February 1966)
These stories feature two battles, one between Dr Strange and Baron Mordo and another with The Dread Dormammu. Strange must fight to protect the Earth while Dormammu strives to reinforce his dominance over his conquered domains. Lee keeps all three stories rattling along at a brisk pace while artist and co-plotter Steve Ditko provides his usual mind-bendingly surreal visuals.

The Amazing Spider-Man vs The Kingpin
“Mission: Crush The Kingpin!”, reprinted from The Amazing Spider-Man issue #69 (February 1969)
No Marvel collection would be complete without a Spider-Man story and this one rounds off the book quite nicely. Spidey is hot on the trail of The Kingpin, who has stolen an artefact from a local museum framing a group of innocent protesters (and Peter Parker’s girlfriend) in the process. The two duke it out for eight pages before the hero escapes with the loot. I’ve never understood how the non-super powered Kingpin could give Spider-Man and his super-strength a run for his money but it’s still a good read. John Romita handles the art chores with his usual skill and the story’s cover remains one of my favourites from his tenure on the title.

Marvel’s Greatest Superhero Battles is my favourite of all the Marvel/Fireside collaborations – the reprinted stories are nearly all classics and the text commentaries provided by Lee are informative and reminiscent of the extras you get with a DVD. Throughout the history of mainstream comics superhero vs villain fights have remained the core story-telling device of the medium. But, as this collection shows, hero vs hero confrontations have also proved a rich vein to mine with Marvel excelling at these confrontations. Usually fuelled by a “misunderstanding”, characters either brawl over some perceived slight or, as in the case of The Silver Surfer in this collection, are tricked into fighting before they realise their mistake and call a truce. This story-telling device has become so prevalent that even The Avengers movie from 2012 utilises it for the fight between Thor and Iron Man. As Lee points out in his commentary, the most difficult element of this kind of story is figuring out how to make the outcome a draw so no one character loses face to another. On the whole he succeeds admirably.

Second hand copies of the book are rare and will set you back more than £20; even though all of the stories featured have been subsequently reprinted in other collections if you’re an old comic book lag like me, or you’re just feeling nostalgic, you’ll find this collection well worth the cost.

Next: The Incredible Hulk by Stan Lee from 1978