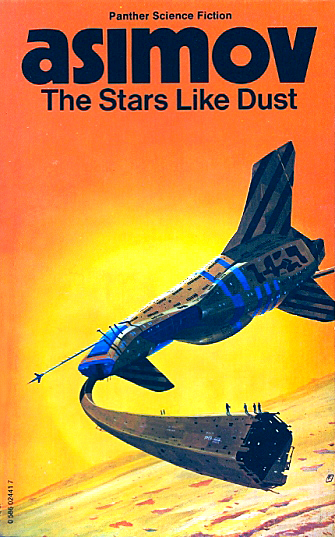 The first in a series looking at some of my favourite book covers and cover artists, mostly taken from my own collection.

It will probably come as no surprise to visitors to this site that as a child my main literary interest lay with comics. Marvel comics were my main staple but DC, 2000AD or any of the cartoon weeklies (Buster, Cheeky, Whizzer and Chips, etc) were all fair game. It’s hardly surprising that with such a diet of fantasy, adventure and heroics I then graduated to myths and legends – the greek and norse myths being particular favourites – and after that I made the natural progression to Science Fiction and Fantasy. I dipped my toe into some of the greats, Clarke, Bradbury etc, but found them all a little dry and I eventually settled on the John Christopher Tripods novels and early David Eddings, to name a few.

I also experimented with the Isaac Asimov novels that were published by Panther Science Fiction. Although I quite liked his short stories (the Robots series and those found in the two-volume Nightfall collections were favourites) I’ll confess that, on the whole, I found Asimov a bit dusty. His ideas were good but his execution was a bit too dry for my tastes. But I was 11 or 12 years old at the time so sue me. I should point out that I re-read Foundation and Second Foundation last year and still found them a bit dull so I suspect the problem lies with me.

However, although I may have found his novels dry, the same cannot be said for the covers. I found those cover paintings by Chris Foss to be almost hypnotic and I soon found myself spending my pocket money buying the books for the covers, many of which I still own to this day. And I don’t think I was the only one for not since Frank Frazetta’s iconic Conan covers of the ’60s had a cover artist contributed so much to selling a book, more perhaps than the author himself.

Foss, an ex-architecture student from Guernsey who made a splash with his illustrations for the Joy of Sex manual, began painting book covers in the late ’60s. His work is both hyper-realist and, paradoxically, altogether fantastic: great hulks of spaceships seem to drift aimlessly through space, the victims of some unseen catastrophe; giant misshapen robots lumber through truly alien landscapes; crumbling ancient cities lie broken, bare girders projecting from blasted chunks of granite. Foss’s work seemed to allude to a secret, ancient history that lay behind the artefacts that inhabited his paintings, a history we are not privy too. This sense of mystery added to the allure of the covers and I couldn’t get enough and I purchased as many of the books as I could afford. It’s a testament to his artistic skill that 30 years later his work still has the power to fascinate and captivate me.

The 12 year old budding designer in me also admired the minimalist typography of the covers: all that was featured was the word ASIMOV in large, usually white sans serif text, with the name of the novel underneath and the publishers name above. Nothing else – no testimonials, no publishers hyperbole and no hint as to what the book was about. Ironically Foss’ paintings didn’t provide any clues either as frequently his artwork bore almost no relation to the story itself, another reason why I found the novels so disappointing. The typography and design seemed to suggest to the potential reader a ‘if you don’t know by now then there’s no point telling you’ attitude to the books contents.

I’m pleased to report that over the last couple of years there has been a welcome resurgence of interest in Foss’ work. The chrisfossart.com website, run by his daughter Imogen, showcases his work and features several interviews with the artist. The site also sells high quality prints of some of his work – I have a few pieces myself, signed by Chris and proudly displayed in my home (follow this link to a YouTube clip of Chris signing one of my prints). There’s also the excellent Hardware: The Definitive SF Works of Chris Foss, a 240 page hardback from Titan Books that was published last year*. And die hard fans may also be able track down a copy of the rare 21th Century Foss, a 1978 retrospective published by Dragon’s Dream.

The Asimov/Foss paperbacks aren’t the only ones in my collection. Amongst others, I’ve a selection of the aforementioned Frank Frazetta/Conan covers and a collection of James Blish/Star Trek novelisations from the late Sixties and early Seventies, all of which feature great cover paintings and all of which I’ll share over the next few weeks.

Click for Hardware: The Definitive SF Works of Chris Foss at Amazon

Some more of Foss’ Asimov covers 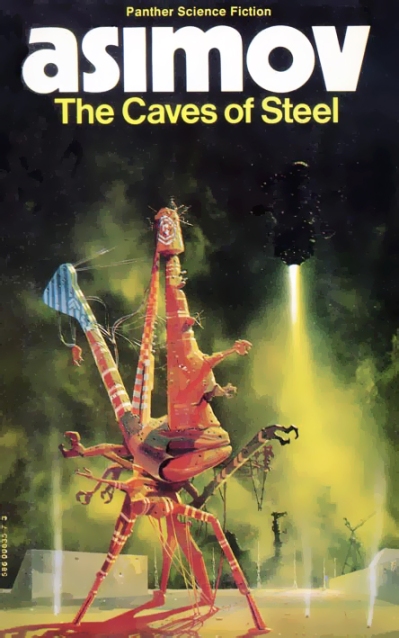 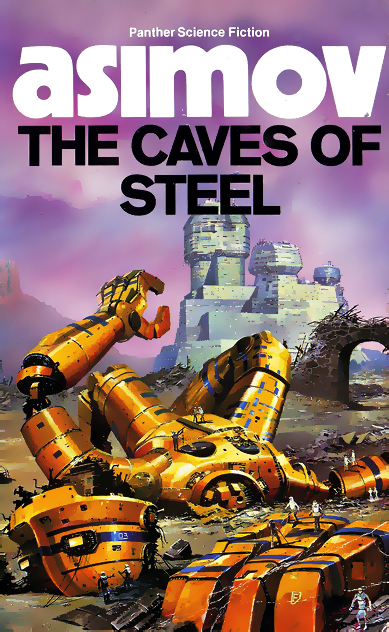